Circular economy - did it start with the Vikings?

One would hardly look at the Vikings as an example of a sustainable culture - the common view of Vikings is that of pillagers and destroyers, not the kind of considerate and responsible lifestyle generally associated with sustainability.

However, some early examples of the circular economy were already well-established practices with the longboat-sailing and axe-wielding wild men best-known for the sack of Lindisfarne. The exhibition 'Vikings - life and legend' that opened this week at the British Museum showcases Arabian dirhams remanufactured into jewellery  a reliquary stolen from a monastery reused by a Viking lady who inscribed her name in runes in the bottom, and worn bracelets chopped up and recycled as bullion.
Yes, I trained as an historian before becoming an environmental professional. So it's fun to be able to join the perspective of the former with the latter.

So much for the past - back to our times

Together with approximately 11,000 other visitors, I spent a couple of days in London at Resource http://www.resource-event.com/, which claims to be the first event on the circular economy ever organised in the UK. It brought together an inspiring mix of people from all around the Circular Network: manufacture, retail, recycling business, social enterprises, charities and network organisations, consultancies, universities and regional governments. 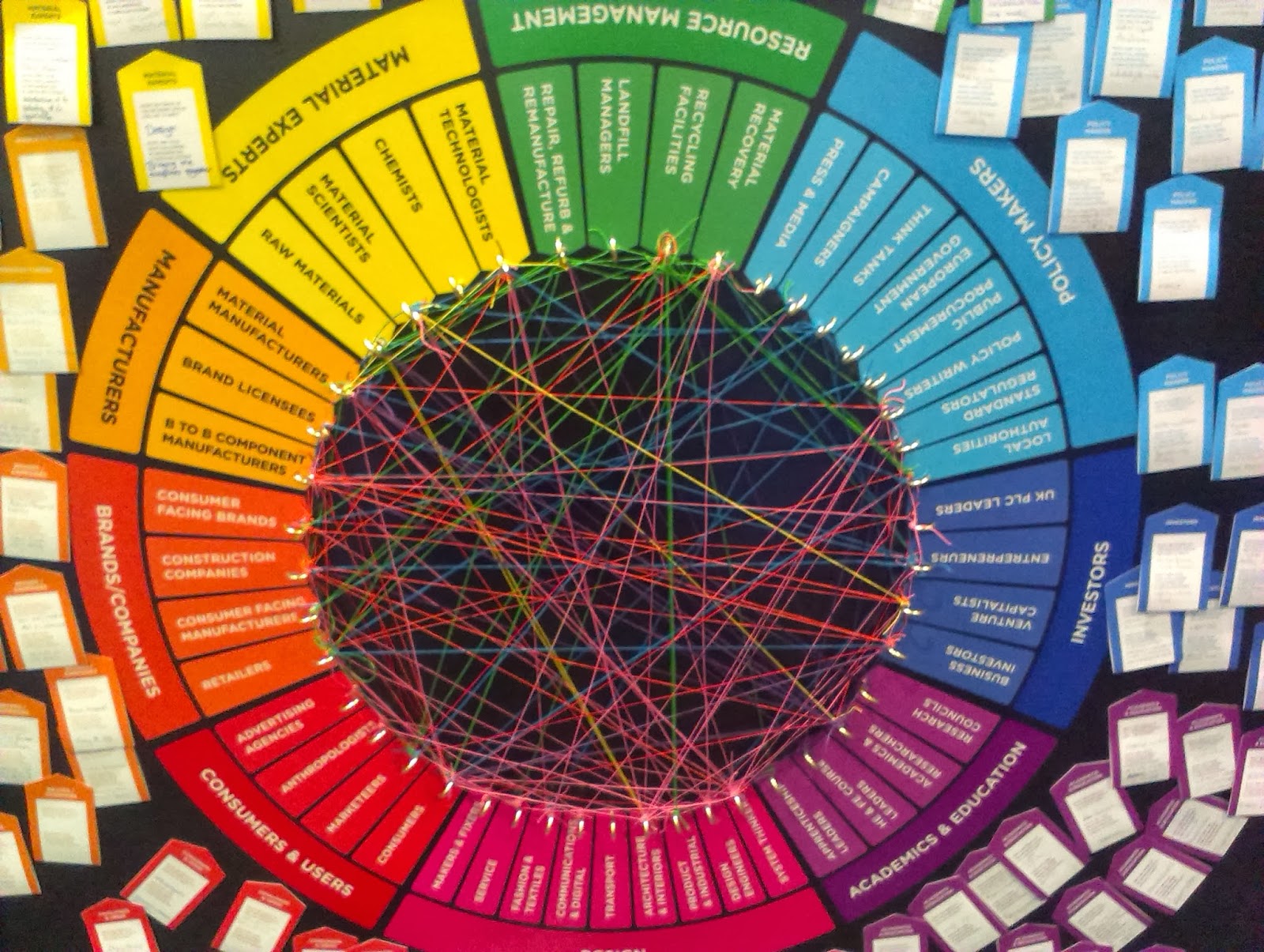 looking after it for the next generation

The organisers had brought on some thought-provoking speakers. I listened to Sir Ian Cheshire, from the DIY retail company Kingfisher, who expressed a strong belief that anybody's business can be reinvented to fit into the circular economy; James Woudhuysen, who claimed that there was no resource shortage. He failed to persuade us that the circular economy was humbug, as he chose to ignore UN, OECD, WRI data all pointing in another direction; and Walter Stahel, who used his 30-year-old Toyota as an example of how the circular economy could work.

Contrary to what I thought, a refurbishment of an old car will lead to a reduction of GHG emissions, as well as a reduction in waste. Another example he used was that of the Patek Philippe watchmakers, who claim: 'You never actually own a Patek Philippe. You merely look after it for the next generation'. Such a watch, by the way, will cost you at least half a year's salary. Stahel also mentioned the Pont de Millau, which had been procured in 2001 with a 78-year contract that included design, financing, building and operation of the bridge. The bridge is practically maintenance-free. The crucial part of the development of the circular economy to Stahel was its emphasis on performance.

Remanufacturing turns out to be something that is already happening on a substantial scale in the business-to-business part of the value chain, and in very specialist niches of public procurement. For instance, at the expensive end of the automotive industry (Rolls Royce), and with the military. High-end investments in equipment keep their value, so replacing components, engines or spare parts easily makes sense. At the same time, the suppliers are specialised so there is little competition, and finally, there are trustworthy quality standards in place.
This serves to point out under what conditions the broadening of remanufacturing to less specialised markets could take place: ensuring quality and reliability is key.

'Vibrant new aesthetics are coming into existence - sustainable design is colourful and witty', said Clare Brass, tutor of innovation design engineering at the Royal College of Art. The role of design was generally acknowledged as a very important one in the whole value cycle making up the circular economy. Redesigning products for recycling, remanufacturing and reuse, but also redesigning as part of a transition to business models centred around services rather than products.

Notably, many of the people I spoke with saw the Netherlands as leading the way in achieving the circular economy. The UK is indeed late in taking up recycling, and the path it has chosen in collecting mixed packaging from households is open to criticism. However, on the upside, the UK is highly effective in promoting relatively new forms of business within the CE in the shape of networks and social enterprises. These are catching on at an incredible speed. Examples include the Restart project, a charity that helps you repair your ICT items, Rentez-vous, a fashion rental company, the Goldfinger Factory that turns your boring old stuff into gold, London Re-use, a network of outlets for repaired household items similar to the Dutch 'kringloopwinkels'.

In a workshop I attended, we discussed what was hampering the circular economy. Beside attitudes and assumptions about reuse, recycling and remanufacturing, several people in our group voiced the lack of flexibility in EU competition and procurement legislation, which was seen to stand in the way of working together in networks with other companies. As network organisation is really at the core of the circular economy, this needs to be brought to the attention of legislators. Maybe some room for experiment can be created at least.

This year's event acted as a launch pad; next year, the organisers promise something bigger. Dates already announced: 3-5 March 2015.